A library is a curated collection of sources of information and similar resources, selected by experts and made accessible to a defined community for reference or borrowing, often in a quiet environment conducive to study. It provides physical or digital access to material, and may be a physical location or a virtual space, or both. A library’s collection can include books, periodicals, newspapers, manuscripts, films, maps, prints, documents, microform, CDs, cassettes, videotapes, DVDs, Blu-ray Discs, e-books, audiobooks, databases, and other formats. Libraries range widely in size up to millions of items. In Latin and Greek, the idea of a bookcase is represented by Bibliotheca and Bibliothēkē (Greek: βιβλιοθήκη): derivatives of these mean library in many modern languages, e.g. French bibliothèque.

The first libraries consisted of archives of the earliest form of writing—the clay tablets in cuneiform script discovered in Sumer, some dating back to 2600 BC. Private or personal libraries made up of written books appeared in classical Greece in the 5th century BC. In the 6th century, at the very close of the Classical period, the great libraries of the Mediterranean world remained those of Constantinople and Alexandria. The libraries of Timbuktu were also established around this time and attracted scholars from all over the world.

A library is organized for use and maintained by a public body, an institution, a corporation, or a private individual. Public and institutional collections and services may be intended for use by people who choose not to—or cannot afford to—purchase an extensive collection themselves, who need material no individual can reasonably be expected to have, or who require professional assistance with their research. In addition to providing materials, libraries also provide the services of librarians who are experts at finding and organizing information and at interpreting information needs. Libraries often provide quiet areas for studying, and they also often offer common areas to facilitate group study and collaboration. Libraries often provide public facilities for access to their electronic resources and the Internet.

Modern libraries are increasingly being redefined as places to get unrestricted access to information in many formats and from many sources. They are extending services beyond the physical walls of a building, by providing material accessible by electronic means, and by providing the assistance of librarians in navigating and analyzing very large amounts of information with a variety of digital resources. Libraries are increasingly becoming community hubs where programs are delivered and people engage in lifelong learning.

The history of libraries began with the first efforts to organize collections of documents. Topics of interest include accessibility of the collection, acquisition of materials, arrangement and finding tools, the book trade, the influence of the physical properties of the different writing materials, language distribution, role in education, rates of literacy, budgets, staffing, libraries for specially targeted audiences, architectural merit, patterns of usage, and the role of libraries in a nation’s cultural heritage, and the role of government, church or private sponsorship. Since the 1960s, issues of computerization and digitization have arisen. 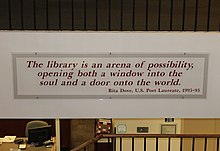 Poet Laureate Rita Dove‘s definition of a library at entrance to the Maine State Library in Augusta, Maine, United States

Many institutions make a distinction between a circulating or lending library, where materials are expected and intended to be loaned to patrons, institutions, or other libraries, and a reference library where material is not lent out. Travelling libraries, such as the early horseback libraries of eastern Kentucky[1] and bookmobiles, are generally of the lending type. Modern libraries are often a mixture of both, containing a general collection for circulation, and a reference collection which is restricted to the library premises. Also, increasingly, digital collections enable broader access to material that may not circulate in print, and enables libraries to expand their collections even without building a larger facility. Lamba (2019) reinforced this idea by observing that “today’s libraries have become increasingly multi-disciplinary, collaborative and networked” and that applying Web 2.0 tools to libraries would “not only connect the users with their community and enhance communication but will also help the librarians to promote their library’s activities, services, and products to target both their actual and potential users”.[2] 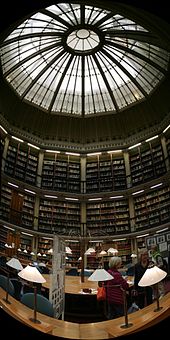 The University Library in Budapest, Hungary

Academic libraries are libraries that are hosted in post-secondary educational institutions, such as colleges and universities. Their main function are to provide support in research and resource linkage for students and faculty of the educational institution. Specific course-related resources are usually provided by the library, such as copies of textbooks and article readings held on ‘reserve’ (meaning that they are loaned out only on a short-term basis, usually a matter of hours). Some academic libraries provide resources not usually associated with libraries, such as the ability to check out laptop computers, web cameras, or scientific calculators.

Academic libraries offer workshops and courses outside of formal, graded coursework, which are meant to provide students with the tools necessary to succeed in their programs.[3] These workshops may include help with citations, effective search techniques, journal databases, and electronic citation software. These workshops provide students with skills that can help them achieve success in their academic careers (and often, in their future occupations), which they may not learn inside the classroom.

The Robarts Library at the University of Toronto, Canada

The academic library provides a quiet study space for students on campus; it may also provide group study space, such as meeting rooms. In North America, Europe, and other parts of the world, academic libraries are becoming increasingly digitally oriented. The library provides a “gateway” for students and researchers to access various resources, both print/physical and digital.[4] Academic institutions are subscribing to electronic journals databases, providing research and scholarly writing software, and usually provide computer workstations or computer labs for students to access journals, library search databases and portals, institutional electronic resources, Internet access, and course- or task-related software (i.e. word processing and spreadsheet software). Some academic libraries take on new roles, for instance, acting as an electronic repository for institutional scholarly research and academic knowledge, such as the collection and curation of digital copies of students’ theses and dissertations.[5][6] Moreover, academic libraries are increasingly acting as publishers on their own on a not-for-profit basis, especially in the form of fully Open Access institutional publishers.[7] 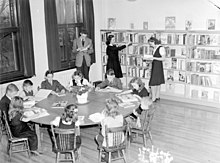 A children’s library in Montreal, Quebec, Canada in 1943

Children’s libraries are special collections of books intended for juvenile readers and usually kept in separate rooms of general public libraries. Some children’s libraries have entire floors or wings dedicated to them in bigger libraries while smaller ones may have a separate room or area for children. They are an educational agency seeking to acquaint the young with the world’s literature and to cultivate a love for reading. Their work supplements that of the public schools.[8]

Services commonly provided by public libraries may include storytelling sessions for infants, toddlers, preschool children, or after-school programs, all with an intention of developing early literacy skills and a love of books. One of the most popular programs offered in public libraries are summer reading programs for children, families, and adults.[9]

Another popular reading program for children is PAWS TO READ or similar programs where children can read to certified therapy dogs. Since animals are a calming influence and there is no judgment, children learn confidence and a love of reading. Many states have these types of programs: parents need simply ask their librarian to see if it is available at their local library.[10]

A national or state library serves as a national repository of information, and has the right of legal deposit, which is a legal requirement that publishers in the country need to deposit a copy of each publication with the library. Unlike a public library, a national library rarely allows citizens to borrow books. Often, their collections include numerous rare, valuable, or significant works. There are wider definitions of a national library, putting less emphasis on the repository character.[11][12] The first national libraries had their origins in the royal collections of the sovereign or some other supreme body of the state.

Many national libraries cooperate within the National Libraries Section of the International Federation of Library Associations and Institutions (IFLA) to discuss their common tasks, define and promote common standards, and carry out projects helping them to fulfill their duties. The national libraries of Europe participate in The European Library which is a service of the Conference of European National Librarians (CENL). 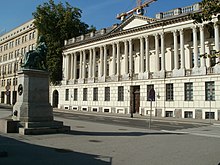 A community library in Ethiopia

Many public libraries also serve as community organizations that provide free services and events to the public, such as reading groups and toddler story time. For many communities, the library is a source of connection to a vast world, obtainable knowledge and understanding, and entertainment. According to a study by the Pennsylvania Library Association, public library services play a major role in fighting rising illiteracy rates among youths.[13] Public libraries are protected and funded by the public they serve.

As the number of books in libraries have steadily increased since their inception, the need for compact storage and access with adequate lighting has grown. The stack system involves keeping a library’s collection of books in a space separate from the reading room. This arrangement arose in the 19th century. Book stacks quickly evolved into a fairly standard form in which the cast iron and steel frameworks supporting the bookshelves also supported the floors, which often were built of translucent blocks to permit the passage of light (but were not transparent, for reasons of modesty). The introduction of electrical lighting had a huge impact on how the library operated. The use of glass floors was largely discontinued, though floors were still often composed of metal grating to allow air to circulate in multi-story stacks. As more space was needed, a method of moving shelves on tracks (compact shelving) was introduced to cut down on otherwise wasted aisle space.

Library 2.0, a term coined in 2005, is the library’s response to the challenge of Google and an attempt to meet the changing needs of users by using web 2.0 technology. Some of the aspects of Library 2.0 include, commenting, tagging, bookmarking, discussions, use of online social networks by libraries, plug-ins, and widgets.[14] Inspired by web 2.0, it is an attempt to make the library a more user-driven institution.

Despite the importance of public libraries, they are routinely having their budgets cut by state legislature. Funding has dwindled so badly that many public libraries have been forced to cut their hours and release employees.[15] 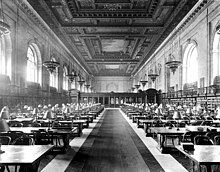 A reference library does not lend books and other items; instead, they can only be read at the library itself. Typically, such libraries are used for research purposes, for example at a university. Some items at reference libraries may be historical and even unique. Many lending libraries contain a “reference section”, which holds books, such as dictionaries, which are common reference books, and are therefore not lent out.[16] Such reference sections may be referred to as “reading rooms”, which may also include newspapers and periodicals.[17] An example of a reading room is the Hazel H. Ransom Reading Room at the Harry Ransom Center of the University of Texas at Austin, which maintains the papers of literary agent Audrey Wood.[18] 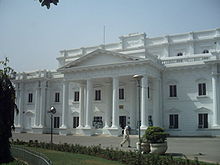 Libraries may have rules which limit noise levels, the use of mobile phones, and/or the consumption of food and drink. [35]

In UK local authority libraries, this has been challenged recently as toddler ‘bounce and rhyme’ sessions have been held [36]. Noise levels in public libraries have become a matter of controversy